Along the trail of learning in the art world we at some point have to accept the fact that composition is a crucial element to a complete painting process. This was a subject I put off learning for some time. I was probably like the new music student learning the notes to play an instrument who says to his instructor “Do I have to learn all of this? Can’t you just teach me to play a song?”. I just wanted to paint. Composition and color theory and all that stuff seemed like such a boor! But as musical notes give the musician freedom to play and create beautiful sounds so does composition add to the painter’s ability to successfully express on canvas with the bonus of engaging and leading the viewer.

Whether using a basic “L” or “S” shape or a bit more complex application, I am convinced that any path to follow is better than none at all. I can highly recommend a book by Ian Roberts, “Mastering Composition” for an in-depth introduction. I am a big fan of structure and processes and Ian does a fantastic job of cleanly laying out information in a way that allows you to memorize the concepts.

Of the many available tools to composing I have used one more than any other. A method that utilizes the golden mean called Dynamic Symmetry. The golden mean was used by the ancient Greeks in art and architecture and can be found everywhere in nature, even our own bodies. It is said to be the most appealing mathematical division of form and is calculated using a 1 to 1.618 ratio on any length of distance. For example a canvas of a 20″ width would have a golden mean vertically at 12.36″ (20/1.618). If the canvas was also 10″ high the horizontal golden mean would be 6.18″ (10/1.618). The “sweet spot” of a painting is said to be where these vertical and horizontal lines intersect one another.

As with many things the introduction of one concept or idea often leads to others. In this case the discovery of the golden mean lead me straight to Dynamic Symmetry. Using the same 1 to 1.618 ratio it also divides the canvas into multiple useful sections as shown in the below example.

Example of Dynamic Symmetry. To do this yourself first find the ratio of 1:1.618. Next I have color coded the lines to allow us to put them in the proper order. At the measured distance of 1:1.618 lay in the light blue line. Next the orange, yellow, green, blue and red. If done correctly your series of lines should look just like mine. (No, you don’t have to do them in color) The smallest rectangle is your “sweet spot” and the other lines can be used with your composition.

This method has been used successfully by many artists from Da Vinci to the father of wildlife painting Carl Rungius. I have done a layover to one of my paintings, “The Playground” to better demonstrate Dynamic Symmetry in action. 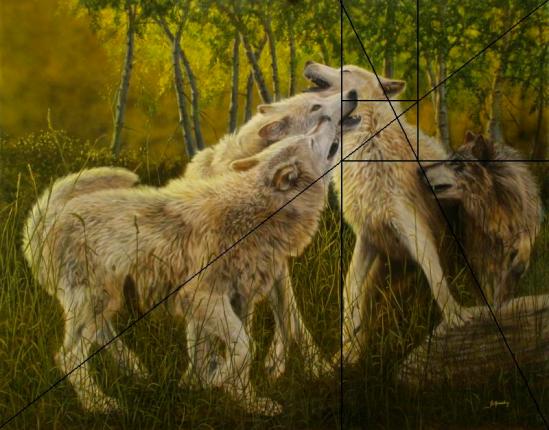 “The Playground” by Joe Kronenberg with Dynamic Symmetry layover.

Though I was unable to get a wolf’s head completely into the sweet spot, all four heads surround it. Notice also the eyes of the black wolf are on one of the lines. The diagonal line on the left separates the black wolf with the white wolf next to it. The wolf stepping on the rock is almost completely enclosed into one of the triangles with its leg on the right following the angle of one of the lines while the leg on the left lies directly at the golden mean line. Also notice how the black wolf is almost completely enclosed in the inverted triangle created by the diagonal and the line at its eye. And finally, I was able to structure the entire painting on the larger triangle created by the two angled lines. Triangles have been used as armatures for centuries having a fantastic visual appeal.

You can probably tell I have embraced and even gotten excited about compositions. Like that music student when he decided the real freedom lied in learning to read notes, I can now better express on canvas. There are those who argue this golden mean idea is nonsense and makes little difference where the viewer is concerned. I can’t say I agree, but the truth is, I don’t really know. What I do know is at the very least compositional tools give the artist structure. With structure comes peace of mind and confidence in your painting process.